I had a student ask me about the different ways to use words like “double” and “twice” in IELTS Writing Task 1. These can be surprisingly difficult words to use correctly. Let’s take a look at a few popular ways to use these words:

In the first two examples here, the basic form of the sentence is subject + verb + time span. Time span is not necessary but does add useful information to the sentences.

One common alternative for double and triple is the verb + adverb phrase “increased twofold” or “increased threefold”. The only other point to note here is that the adverb “nearly” comes between “increased” and “threefold”.

It’s also common to use “increase” as a noun with “twofold” working as an adjective together with the be verb. For whatever reason, this form is usually used for increases rather than decreases.

Double and triple are predeterminers which include multipliers (double, twice, four/five times . . . .) as well as fractions (one-third, three-quarters, half, etc.). They are most commonly used when making comparisons.

Let’s take a look at some examples: 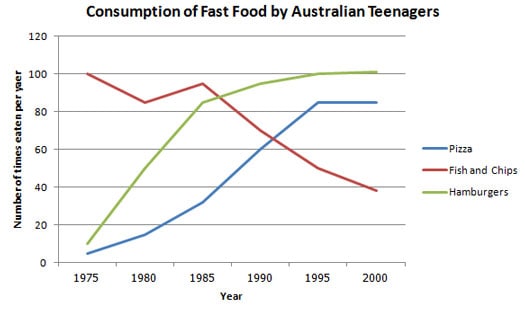 Look at the chart above. Try to make at least one sentences using each of the patterns above.